On August 17, USAtoday.com published an article saying Donald Trump’s approval rating is at its lowest since he has taken office, with only 35 percent of Americans giving him a positive rating, according to a new Marist Poll released this month.

"A Better Deal" for American Workers? Not Without Unions

On August 13, truthout.org published an article explaining why the future of unions is precarious, noting union membership has been in steady decline. They reported the stridently anti-union stance of the Trump administration, Congressional Republicans and state government Republicans, as well as a hostile Supreme Court, pose a substantive threat to union existence.

On August 1, online news site Splinter published an interview with AFSCME Pres. Lee Saunders regarding the attacks on working people and about trying to survive the "battle" of the vicious new Trump era.

Mind the Gap: Why Wage Growth is Falling Behind

An article recently published on afscme.org, notes that eight years after the end of the Great Recession, job growth is steady, unemployment is down and interest rates remain low. Yet, American wage growth — the rate at which pay raises are given – is not where it should be.

What does all this mean for most Americans?

Trump’s Labor Board Appointments Are Another Blow for Unions

In 2000, Donald Trump wrote in his bookThe America We Deserve that “with the globalization craze in full heat, unions are about the only force reminding us to remember the American family.” During last year’s presidential campaign, he boasted that he had “tremendous support within unions” and then received a larger share of the union vote than any Republican since Ronald Reagan.

But as president, he hasn’t always repaid the favor. On Wednesday, a Senate committee approved two Trump nominees, Marvin Kaplan and William Emanuel, to the National Labor Relations Board who have long records of fighting unions. If they are confirmed by the full Senate, Republican appointees will control the five-person board and be able to undo rulings that made it easier for workers to form unions.

On July 16, Politico.com reported that according to a new ABC News/Washington Post poll, President Donald Trump has hit the lowest approval rating of any president during their first nearly-six months in office in 70 years.

Labor board is set for power shift under Trump

The balance of power on the nation’s labor law enforcement board is set to shift under President Trump. Conservatives say that the National Labor Relations Board (NLRB) – responsible for enforcing workers’ collective bargaining rights and fair labor practices – has spent the past eight years under former President Obama catering to unions. Trump now has the opportunity to shift the balance of power with a new Republican majority on the board that could overturn some of the most controversial rulings lambasted by businesses

President Donald Trump's nominees for two spots on the National Labor Relations Board, who are expected to give the agency a Republican majority, will face a grilling on Thursday by Democrats in the U.S. Senate, including a key lawmaker who said she was "deeply concerned" about their records backing employers, trade groups, and Republicans.  Sen. Patty Murray of Washington, the top Democrat on the Senate Health, Education, Labor, and Pensions (HELP) Committee, said that if confirmed, lawyers William Emanuel and Marvin Kaplan could undermine basic worker protections.

On the Record: Freedom

Freedom means more than making a living. It means the ability to financially support your family and have time to be there for them. AFSCME President Lee Saunders explains how corporate interest groups are working tirelessly to chip away at the freedoms that unions have won for everyone.

READ: Koch brothers behind the push to kill healthcare in U.S. 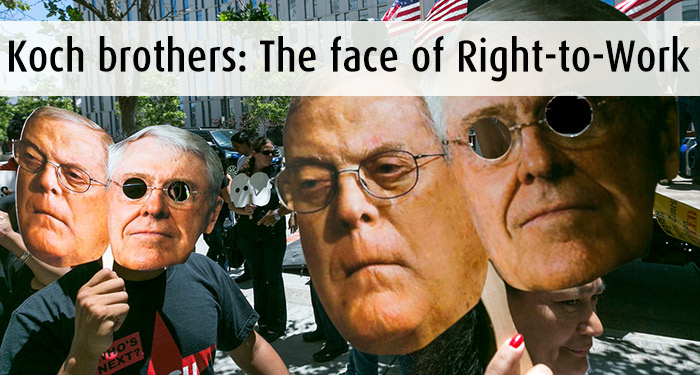 On June 27, peoplesworld.org reported that if the healthcare bill now before the Senate becomes law, about 22 million people would be stripped of Medicaid benefits.

According to the article, this number is not high enough to satisfy Charles and David Koch, the billionaire oil magnates and the driving force behind harmful right-to-work laws.

The Koch brothers are now using the well-funded PACs Americans For Prosperity, and the Freedom Partners network, to pressure Senators into ending Medicaid altogether and using the money that’s saved to give tax breaks to the richest people in the country; people like themselves.

READ: Poll Shows U.S. Tumbling in World’s Regard Under Trump

The Washington Post published data from a recent poll indicating Trump’s presidency has taken a toll on the United States’ image abroad.

The international survey by the Pew Research Center found that favorable ratings of the United States have decreased from 64 percent of people across all countries surveyed at the end of Barack Obama’s presidency to 49 percent this spring. The new figures are similar to those toward the end of the George W. Bush administration.

In the June 20 issue of the New York Times, Noam Sheiber describes how Trump is moving forward with his attacks on labor.

In a PRwatch.org article published this year, Mary Bottari describes how documents examined by the Center for Media and Democracy (CMD) expose a national effort by the Milwaukee-based Lynde and Harry Bradley Foundation to defund and dismantle unions, the most significant force for higher wages and better working conditions in America.

WATCH: Why "Right-to-Work" is wrong for workers