Advocating For You: Legislative Action Gets Results 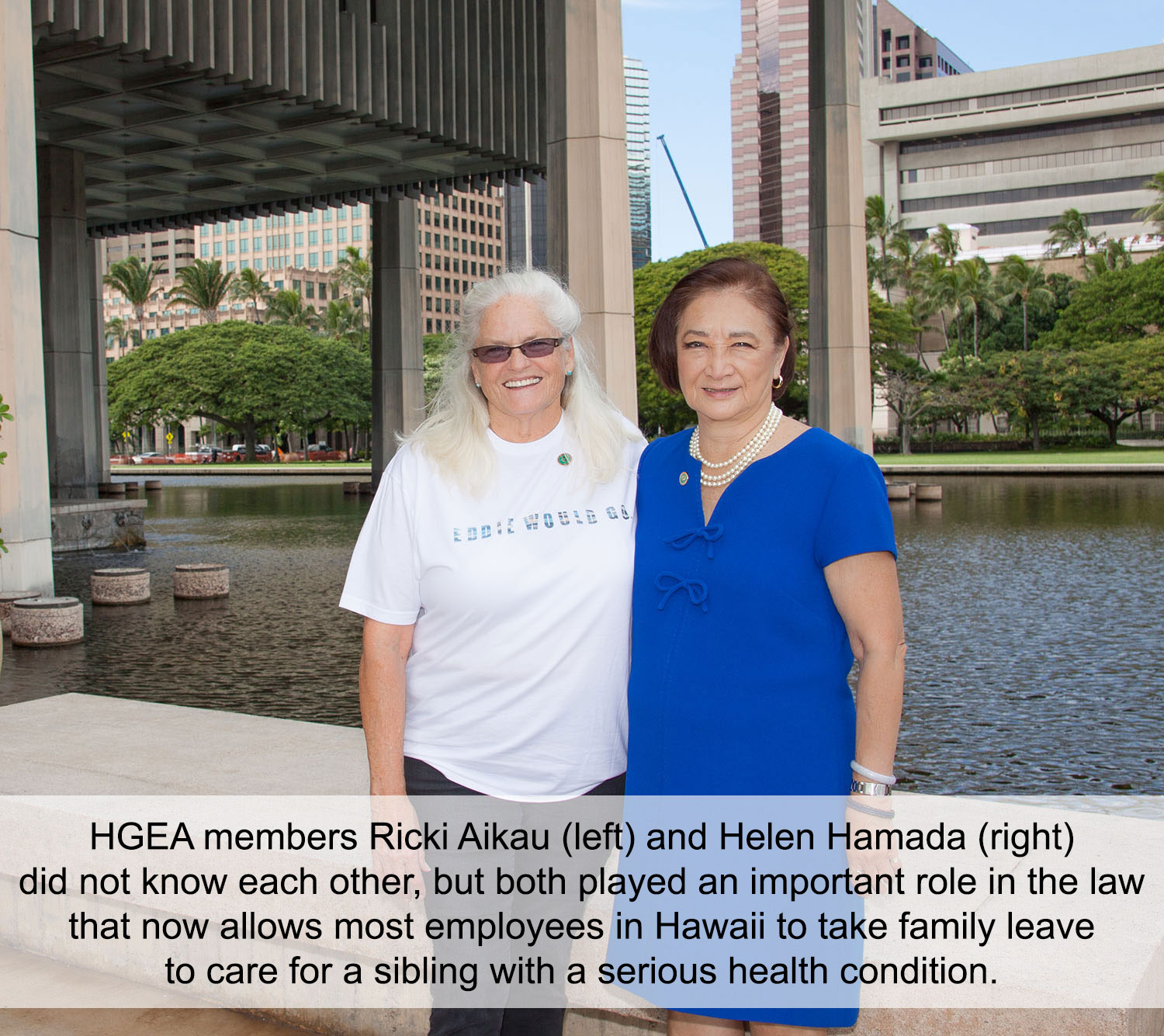 It was quietly signed into law without any fanfare in July 2017, but the bill that took six legislative sessions to pass now allows most employees in Hawaii to take family leave to care for a sibling with a serious health condition. It was the perseverance and tireless efforts of HGEA staff and members that brought the proposal to full fruition.

For HGEA members Helen Hamada (Unit 8) and Ricki Aikau (Unit 3), who individually proposed the idea because of their own personal circumstances, the bill was a no-brainer. Previously, the state law stated that besides the birth or adoption of a child, employees were entitled to take family leave to care for their “child, spouse, reciprocal beneficiary or parent with a serious health condition.” Siblings were not included.

When doing her research then, Hamada discovered that even the federal law, the Family and Medical Leave Act, didn’t include siblings. (Although siblings are not explicitly included in the FMLA, the law has since expanded its definition to allow siblings acting in loco parentis, or “in the place of a parent,” to take leave to care for another sibling who is “incapable of self-care because of a mental or physical disability.”) One of Hamada’s sisters has a medical issue, and caring for her requires much time and cost among Hamada and her sisters. “I heard from members who had the same problem as me. They didn’t have anybody to help take care of their sister or their brother who had health or medical issues, and had to take vacation to care for them,” she shared, in disbelief. “You’re denying a brother or sister to help his or her own blood. It costs a lot to hire someone to assist, so why shouldn’t we include siblings?” 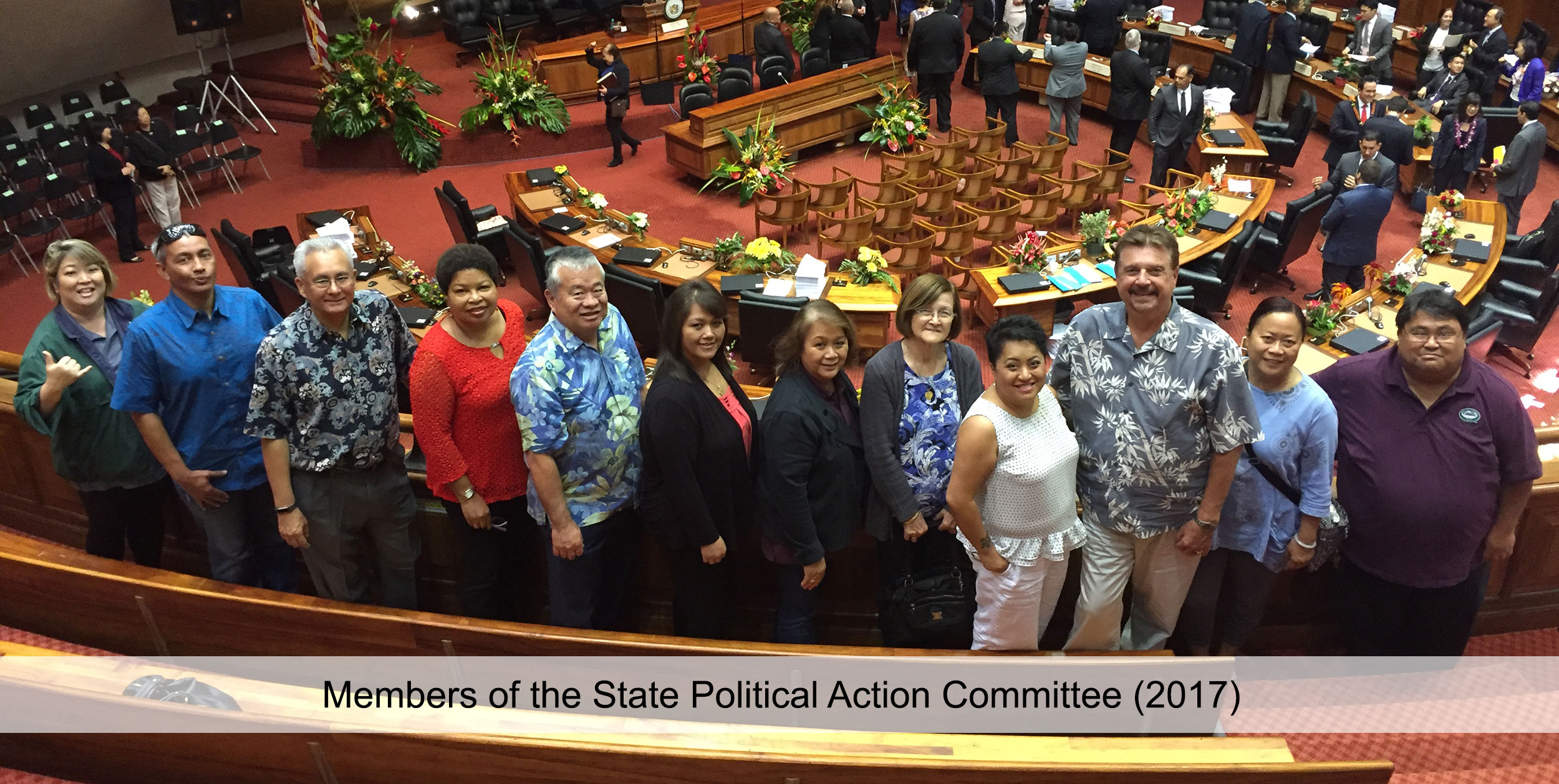 Aikau, a library technician at the Hawaii State Archives, had to take vacation leave to care for her late sister, who lived in Massachusetts. “Every other family member is covered, why not siblings?” she also wondered. Especially in Hawaii — with our multi-generational families and where ‘ohana means more than just family and with all the responsibilities and obligations of belonging to one. A family caregiver is usually a son or daughter taking care of his or her parent. But as Americans live longer, more siblings are taking on such duties for each other as well.

“Our concept of family and caring for one another is so much broader in Hawaii than in other places. This means that so many of us are taking care of anyone in our family who needs help,” said State Representative Aaron Johanson, who authored the bill in the 2017 legislative session. “This legislation was an important step forward in making sure our laws better recognize the obligations that we feel to all of our ‘ohana.” 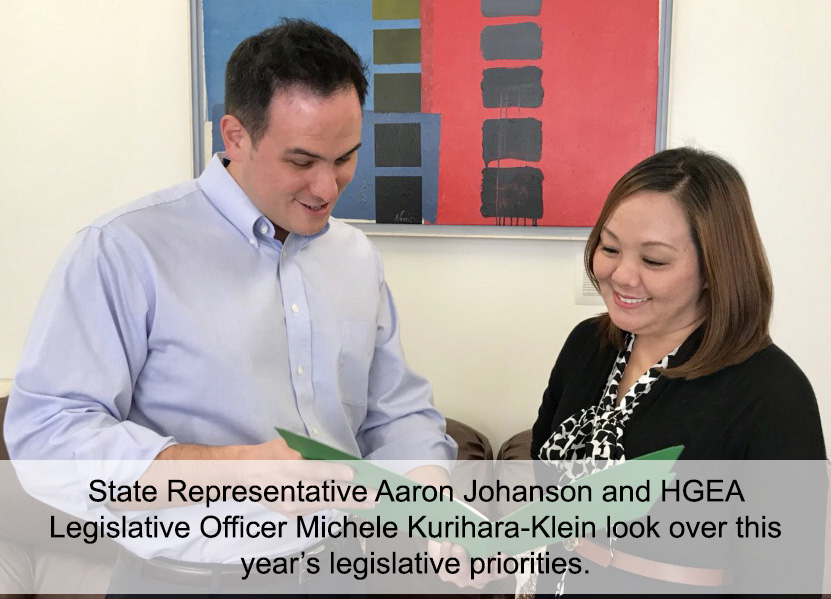 It was through the efforts of HGEA that changes were made to family leave affecting most Hawaii employees. The new state family leave law (Act 128) applies to not just state and county workers but private-sector workers in companies with 50 or more employees. Additionally, the definition of “sibling” includes adopted and hanai brothers and sisters. “I’m really thankful that all workers will benefit from this,” Aikau said. “My grandchildren, great-grandchildren and on will have the benefit of being able to spend their last days together to say a proper aloha when the end has come.”

GETTING INVOLVED IN LEGISLATIVE PROCESS

When it comes to changing law and public policy, however, it takes time and a process that involves lobbying, hearings and testimonies. The family leave expansion bill, which was first introduced in the 2012 legislative session, kept being deferred. Johanson acknowledged that employers typically do not embrace the expansion of leave benefits. During one hearing, Hamada remembered becoming angry when a state department director testified that it was going to be too expensive for the state system. “Every session the bill would just sit there,” she said. Aikau shared that one of her friends, a state attorney, told her it was never going to happen because it was too costly.

With the help and encouragement of HGEA staff like Legislative Officer Michele Kurihara-Klein, Hamada, Aikau and other members took legislative action. “I started lobbying with the legislators, saying that something has to be done,” said Hamada, who works in media design and production at the Center for Excellence in Learning, Teaching and Technology at Kapiolani Community College. “Michele told me it might be good to write letters to the governor so I did. I put it in the context of what if you and your wife are no longer here and your kids have to watch out for each other, how is it that they can take care of each other? Obviously I never got a response back, but when he signed the bill, I thought ‘okay, thank you.’ I guess persistence pays off. ”

Hamada, an HGEA member for more than 40 years, steward and former member of HGEA’s Political Action Committee, understands the significance of becoming involved in the legislative process. “Lobbying is so very important. You just have to keep trying,” she said, having learned much from an AFSCME Legislative Conference she attended in Washington, D.C. “The importance of learning to lobby the legislators is to fight for the rights of members. But in the end, it is for all the citizens of the counties and state of Hawaii. This family leave expansion bill was not an instant success, but persistence and perseverance in submitting testimonies and lobbying some of the legislators finally got it through. We made sure the legislators got the message — it benefits their own families, too!”

“You talk to anybody that would listen,” added Aikau, who attended hearings, wrote letters and encouraged others to testify in support of the bill.

Johanson recognizes how critical in-person testimonies are. “HGEA members were instrumental in taking up the fight for expansion of family leave. They became the personal face of the issue,” he said. “All too often, policy issues can lack a personal face at the Legislature. That can slow passage of a good and needed policy change. HGEA members kept up the fight and succeeded last session.”

HGEA NEVER STOPS FIGHTING FOR YOU

Aikau gives much of the credit to HGEA for making the expanded family leave law happen. “I’m quite sure I and other members couldn’t do it by ourselves,” she admitted. “Michele was really wonderful and followed up all this time. My strength and passion waned after a while, but their (HGEA’s) passion didn’t. That’s the beauty of the union; that’s their job. Without HGEA fighting for us, there would be no law.”

Through its comprehensive legislative program, which is planned and developed by the state Political Action Committee comprised of members, Kurihara-Klein and other union staff, HGEA continually fights to protect the rights and benefits of members. More than 5,000 bills were submitted for this 2018 legislative session, and HGEA staff closely monitors and reviews every bill to ensure employee benefits are not being taken away. At the same time, HGEA also introduced bills in support of worker rights and to enhance current benefits.

It is HGEA’s proactive approach and achievements like the family leave expansion law that instill in Aikau, who at first was resistant to being a member, union pride and confidence that HGEA is always there for her.

“When I actually approached the union for help, they listened, they supported and they did not give up. They have my support after 20 years,” Aikau said. “HGEA protects the people of Hawaii. Everyone in the union has a say. If a member has an issue, they need to bring it to the union for resolution. It’s human nature for people to grumble and not take any action. But it’s taking action that gets things done, or changed. The more strength you have behind you the better your chances of success. I trusted the union with my issue, and they got it done.”