Cultivating the Art of Food Service 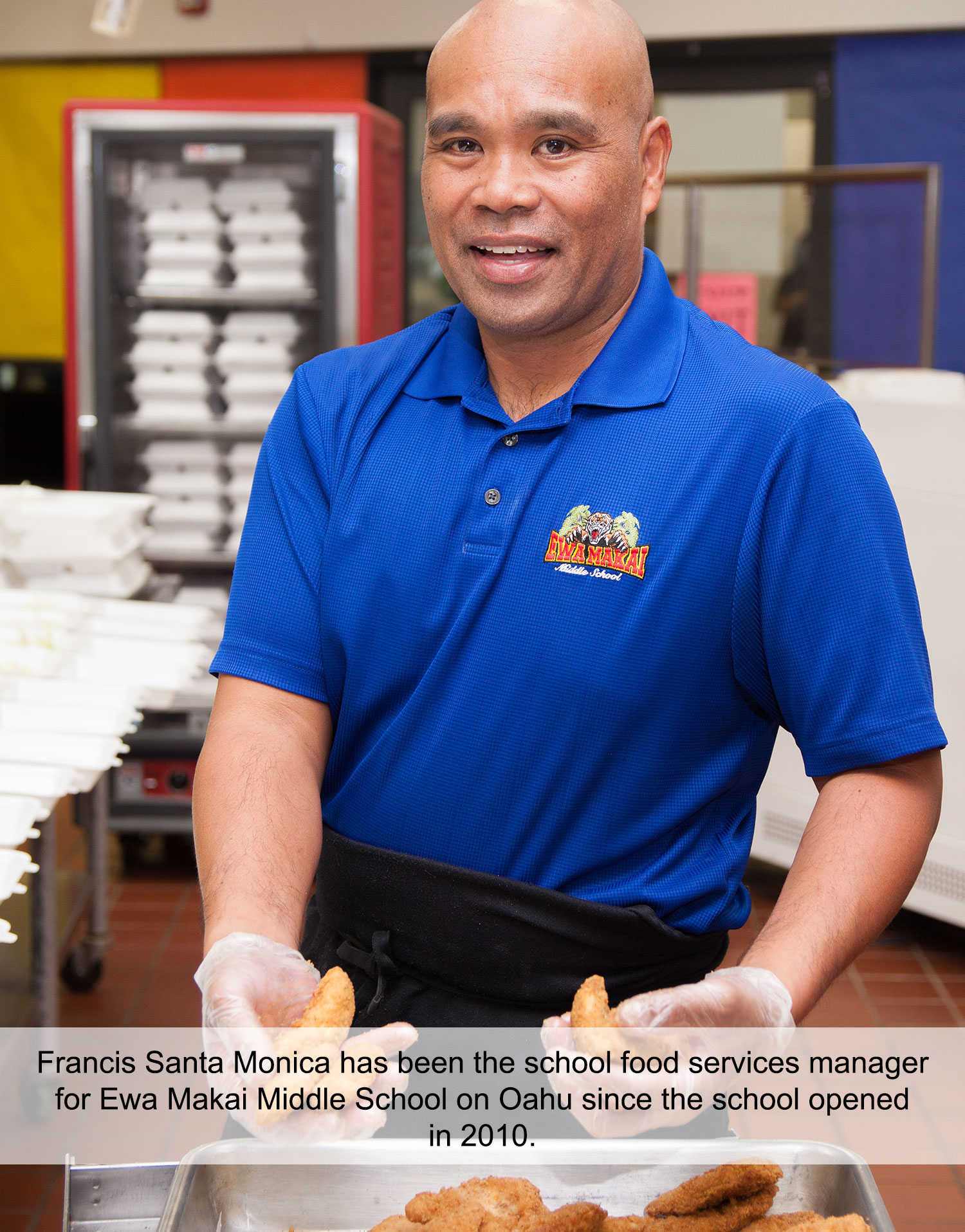 Throughout his nearly 30-year culinary career, Francis Santa Monica has lived and worked by his own creed of working hard and giving back. His impressive work ethic and compassion for the students and his community have not gone unnoticed. Last year the Ewa Makai Middle School’s school food services manager was honored by the State Department of Education with the 2016 Manager of the Year award for special and continued contributions to improve the quality and effectiveness of school services.

The recognition is one for which Santa Monica is proud yet not comfortable talking about. “It was very humbling, something I never expected,” he said modestly. He instead gives credit to his staff, other co-workers and the school administration for all their support. “I work with and have worked with great people,” he added. “I appreciate all of my past and present cafeteria supervisors and school administrators for their guidance and patience. And I’m thankful for my co-workers and other cafeteria managers for always providing help when needed.”

In nominating Santa Monica for the award, former Ewa Makai Middle School Principal Edward Oshiro, who recently retired, praised Santa Monica for being an exemplary manager who “has systematically transformed and modified the function and efficiency of lunch preparation, service, and management.” Ewa Makai Middle School’s vision is to “empower, explore and excel together,” and Santa Monica certainly embodies that vision, with his help and support of afterschool programs, school fundraising efforts and mentoring. It’s no surprise that teachers describe him as the “heart of the school” and students look up to him as a role model.

For someone like Santa Monica who he says his sister recalls “was hardly ever in school” growing up, the approval of the students is a high compliment for him. “I wished I had someone to mentor me when I was younger to keep me out of trouble,” he said, laughing.

Ensuring that the students eat a healthy meal, especially their vegetables — he noted that they are competing with many fast food restaurants near the school — Santa Monica provides healthy snacks and refreshments for students involved in afterschool programs and community learning projects, prepares special gourmet meals for school events and sets aside lunches for students involved with school lunchtime activities. 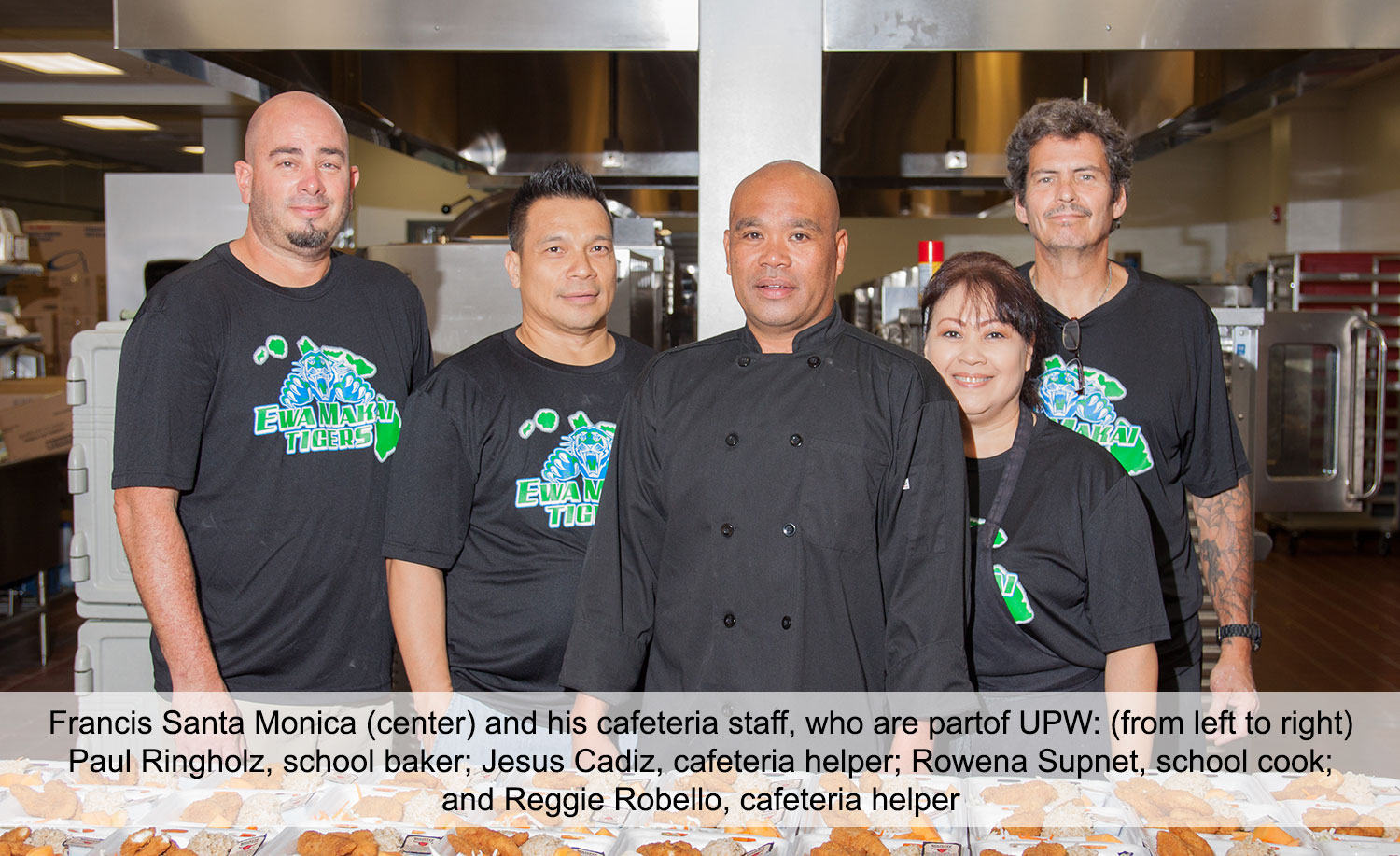 He even takes the time to help students think about their future and possible careers, and has taught cooking classes for interested students. For Ewa Makai Middle School’s grand opening on Oahu in 2010, he trained students in the art of food service and waiting tables, even providing them with uniforms so they could really understand and appreciate a true dining experience. “I tell them to work hard and don’t be afraid to get out of their comfort zone,” said Santa Monica, who also encourages and helps his co-workers to advance in their careers.

The students are the reason he gives back to the school and to the community. What he enjoys most is working with them and helping them realize their potential. “I’ve bumped into many of the students from previous schools I worked at years ago,” he shared. “It is satisfying that many remember me, and to talk to them and know that they are in a good place, that they’re working or going to school.” 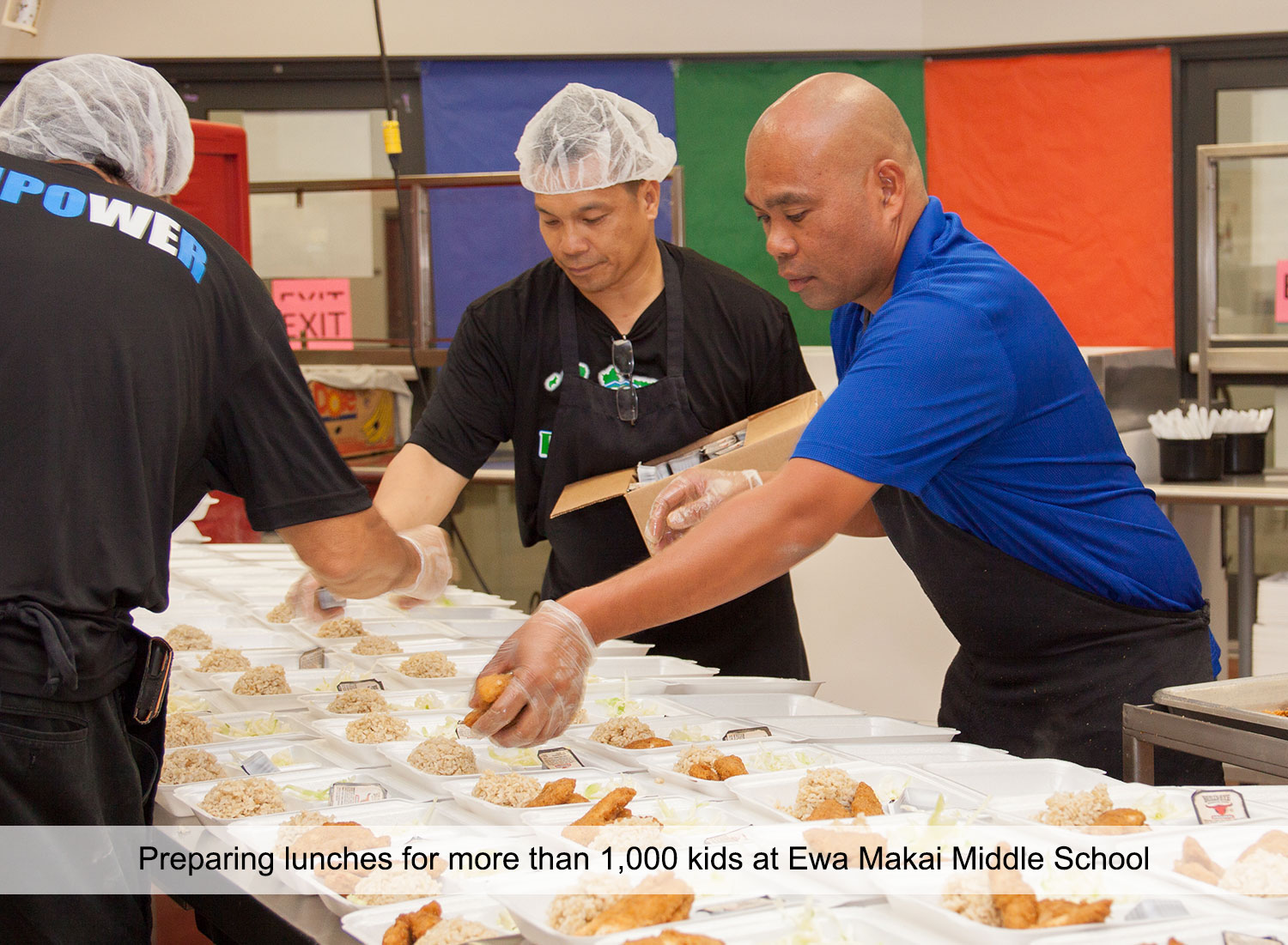 Santa Monica is glad someone realized his own potential. Prior to joining the DOE, he had worked as an apprentice painter, a fish cutter, and a cook at various restaurants. Having earned a culinary arts degree, he began his public service career as a cafeteria helper at Mililani High School, moving up to school cook at McKinley High School and later Pearl City Elementary School.

With much encouragement from his wife, he decided to apply for the position of school food services manager, or cafeteria manager, as it is commonly called. After numerous interviews on Oahu, he got the job, but it was at Kekaha Elementary School on Kauai. “Thank God for someone giving me a shot,” Santa Monica said. At the time his oldest son was just born, yet he felt it was an opportunity he could not pass up. He moved back to Oahu after one year and worked as the school food services manager at Kalihi Uka Elementary School for nine years.

“My career has been such a great experience, a lot of character growth,” he acknowledged. “The school food service program has evolved since I was first hired in the state almost 30 years ago so I learned how to adjust as needed. There continue to be changes to the program, and with that we must continue to adapt in order to be able to sustain and have a successful program.” 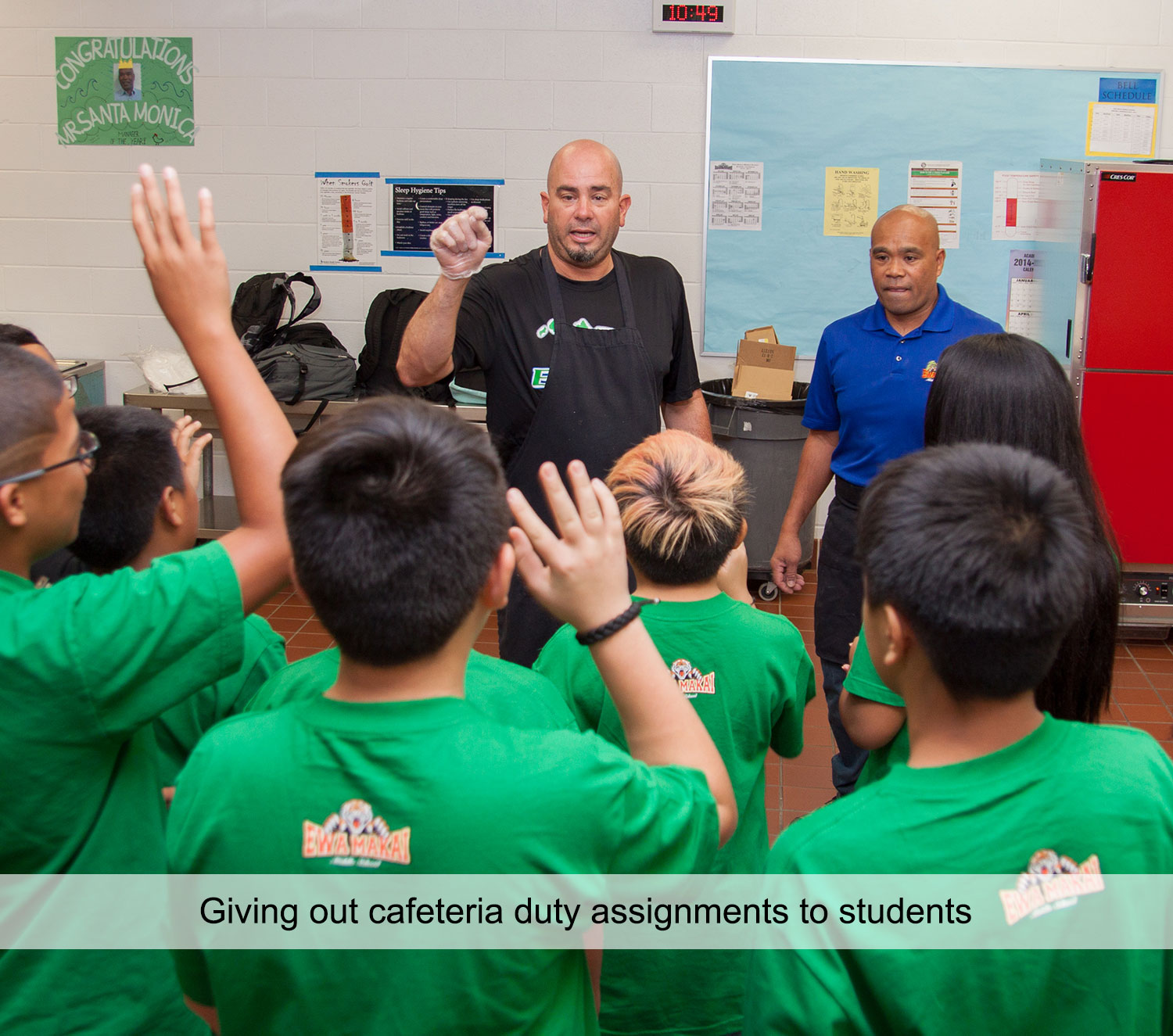 It’s no easy feat feeding more than 1,000 middle-school children. Daily they serve 780 lunches and 150 breakfasts — that’s about 4,650 meals every week. And for all of last year Santa Monica and his staff took on the challenge of preparing meals for an additional 1,000 kids at Ewa Elementary School while Campbell High School was being renovated (Campbell provides meals to Ewa Elementary). They’ll be even busier in two years when construction is done and sixth graders move in to Ewa Makai Middle School.

As a manager, Santa Monica’s work is more administrative — menu planning, recordkeeping, working with vendors, ordering provisions and supplies, ensuring cafeteria equipment is safe and operates properly — but you’ll often find him on the line helping his cooks, bakers and cafeteria helpers.

Santa Monica remarked that technology has made his job much easier, from ordering food supplies to inventory, and federal guidelines are in place for healthier meals for students. With his vast experience in the food service industry, he has been invited and has attended planning meetings for new schools where he has given his input regarding optimal cafeteria layout and the right type of equipment to purchase.

He truly enjoys his work and said he has been fortunate in his career — memorable highlights include cooking for state officials and for local recording artist Jack Johnson — and has “developed lasting relationships with such a great set of people.” 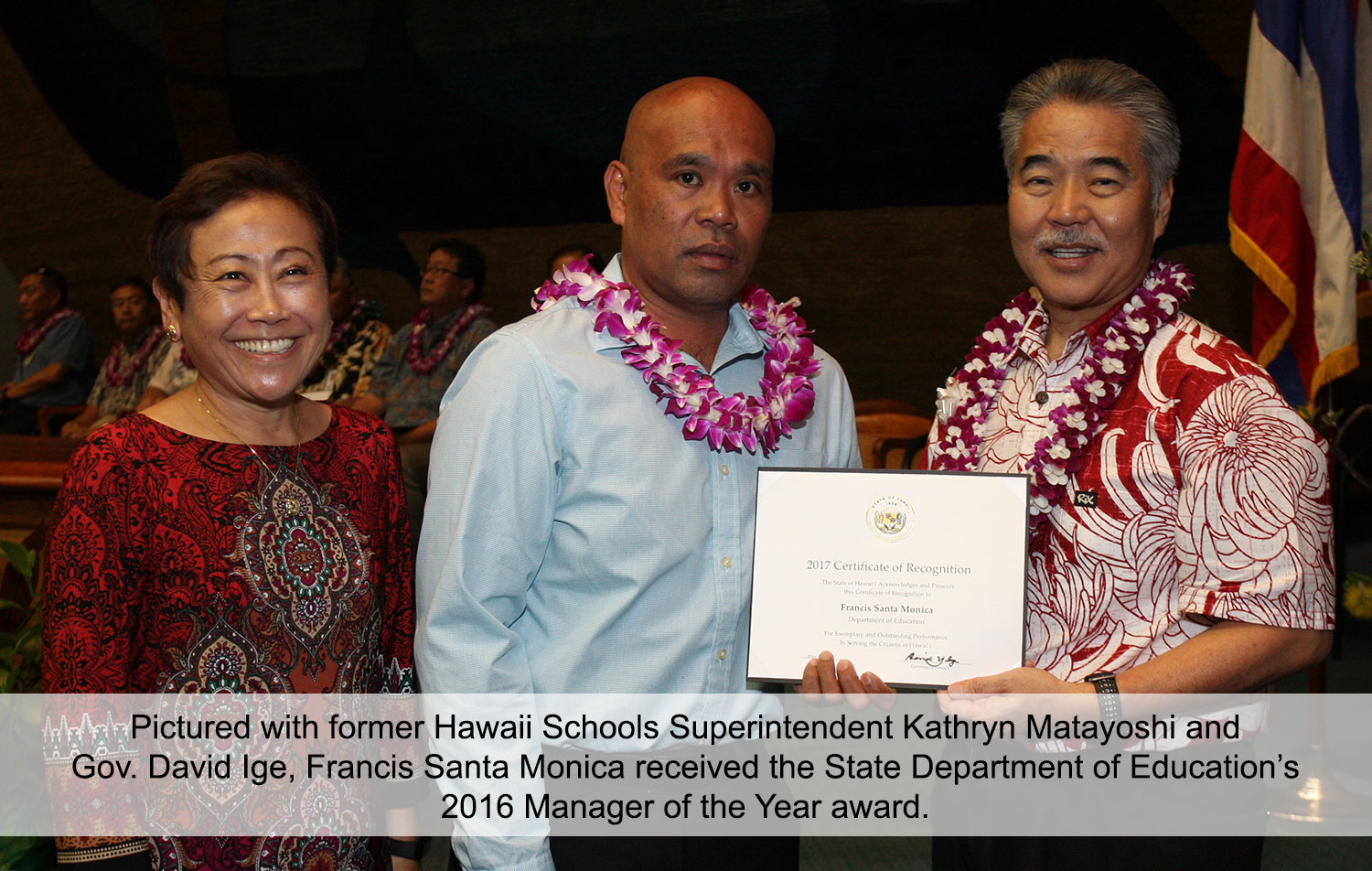 Santa Monica is a proud union member, too. Every spring he is one of the cafeteria managers helping at the annual cookie bake fundraiser on Oahu for HGEA’s Charles R. Kendall Scholarship and Education Fund. For him, it is again about the students. “It’s always nice and so vital to give back to people and the community through these types of programs,” he said.

We are impressed with his dedication to his job, school and students as well as to his family. The spare time he has is spent with his wife and children, including being an assistant scoutmaster for his sons’ Boy Scout troop. What he values is helping others be successful in life. And he passes along this piece of advice: “Try your best in all you do, but most of all enjoy it.”