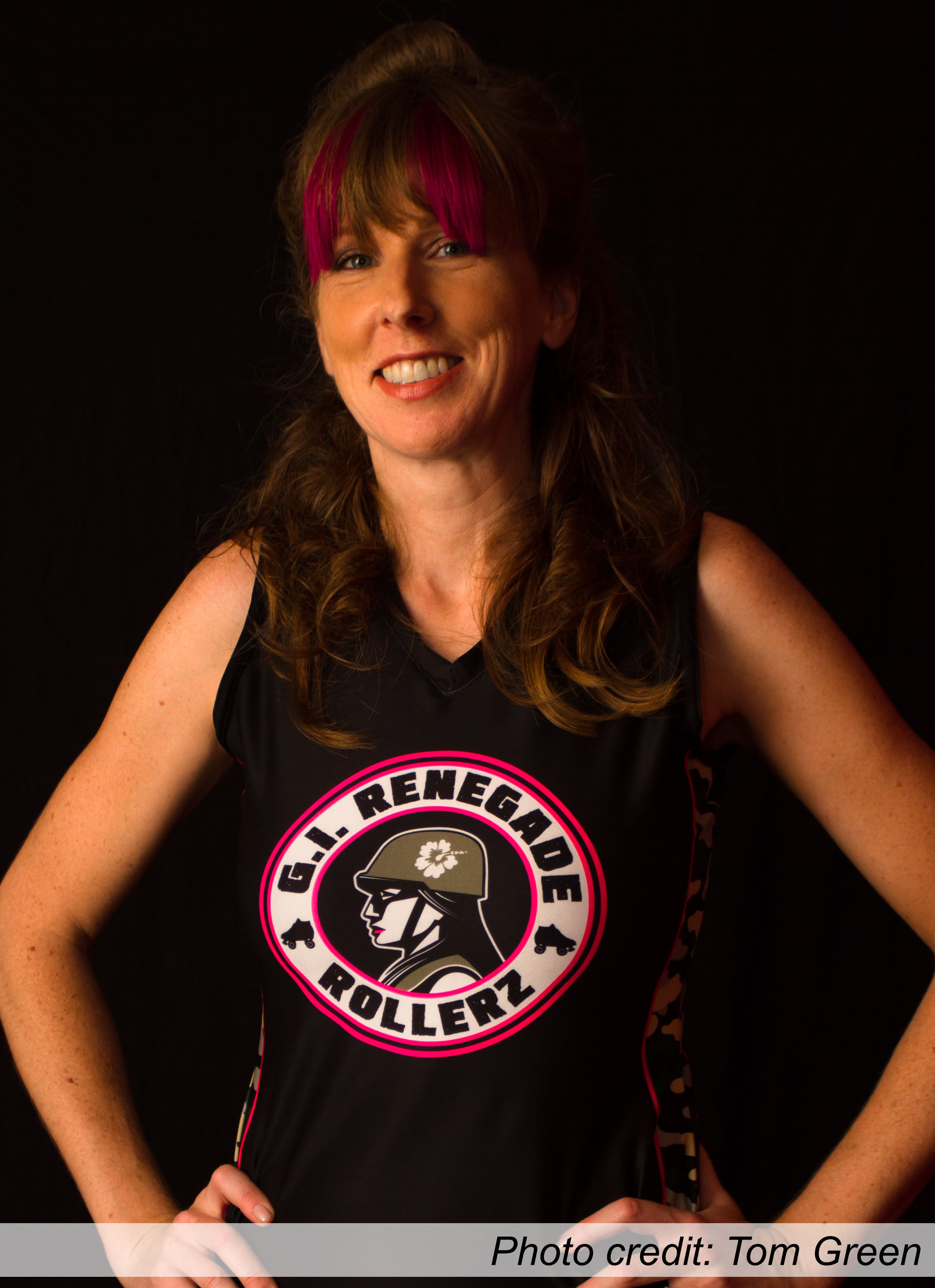 When she’s not at her IT job, paper crafting and designing her own greeting cards, or surfing and stand-up paddling when time allows for a beach day, Amanda Swanson plays roller derby.

Known by her teammates as “Chilly Pepper,” having come from Washington and having played ice hockey, skied and snowboarded, Unit 13 member Swanson is a blocker for Garden Island Renegade Rollers (GIRR), the only roller derby team on Kauai. “I love it. I love the people that I play with, and I really like skating,” she said. “We’re constantly thinking and learning about strategy.”

Contrary to what most people believe, roller derby is not a violent sport – though Swanson, who has been playing for more than five years, noted that in this contact sport “there are a lot of bruises that happen, but minimal injury.”

This year it’s the Garden Island Renegade Rollers’ turn to host the Battle of the Islands tournament scheduled for September. Volunteers are welcome and needed.

If you’re interested in being part of GIRR, visit www.girenegades.com for more information. “I love the camaraderie,” Swanson added. “It’s a really good workout, lots of cardio. It’s just a really fun thing to do.” 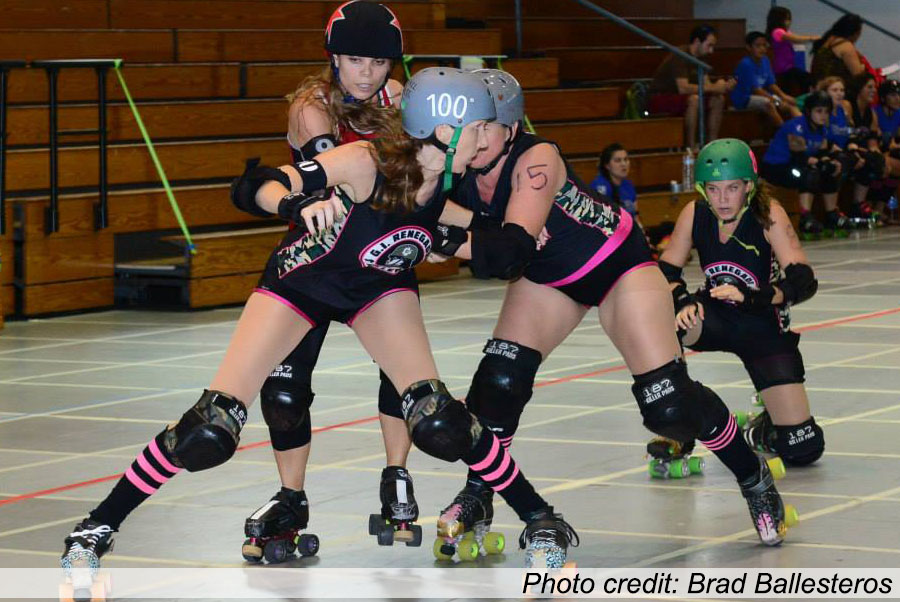 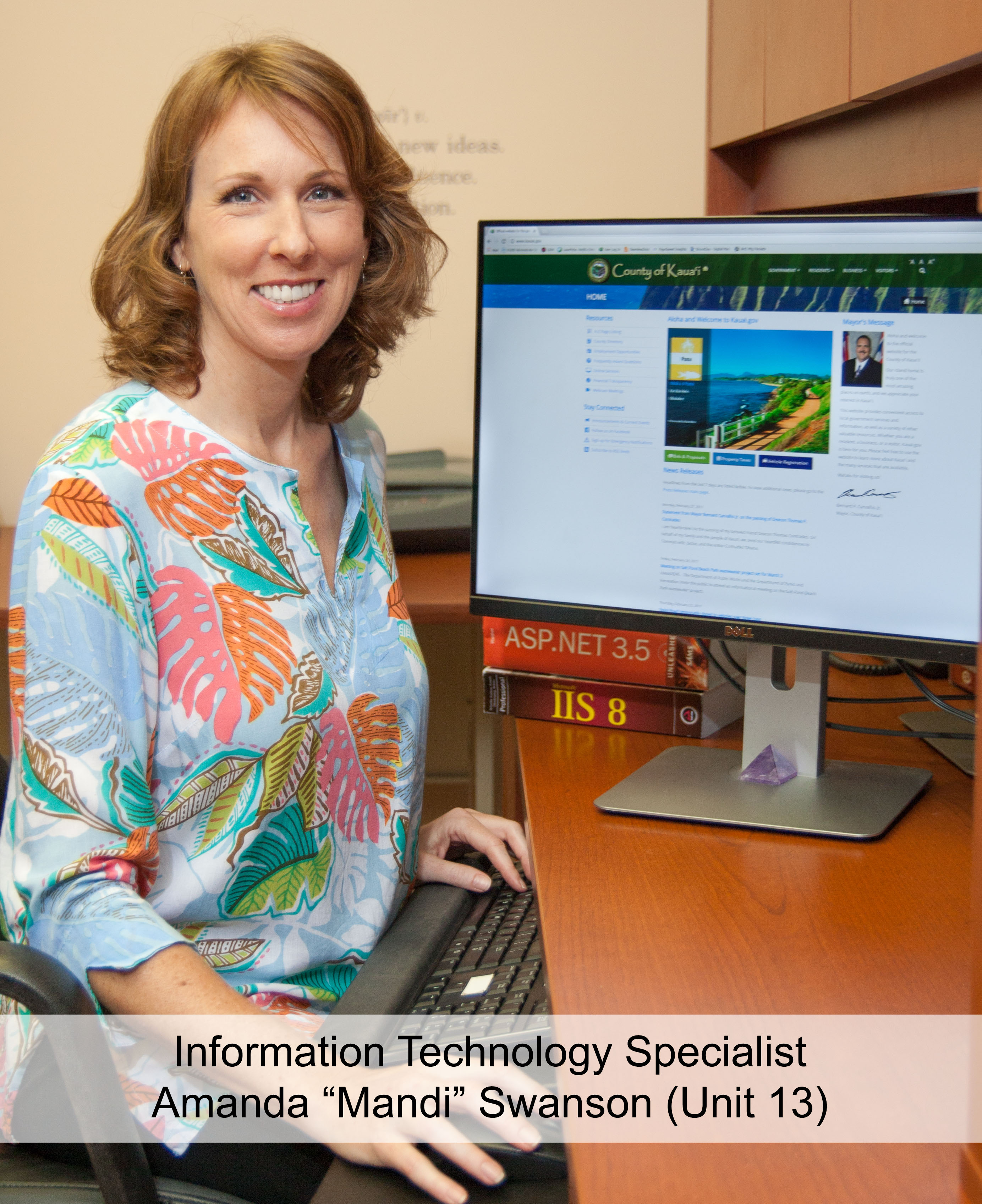 When Amanda “Mandi” Swanson was in the fifth grade, her teacher expressed concern to her parents. While the other kids were outside playing, she was spending recess time indoors playing with the teacher’s Apple computer. “I guess I’ve always been a geek,” Swanson admitted, laughing.

Impressively, this self-proclaimed computer geek from Washington, whose early interest in computers continued throughout high school and college, where she received her bachelor of arts in computer science at Seattle Pacific University, landed a job as a software design engineer in test for technology giant Microsoft Corporation.

Considering how difficult it was just to get an interview with the tech company, it was an admirable feat to get hired among a highly competitive pool of applicants. Fortunately for us, Swanson is now employed at the County of Kauai and is an active HGEA member.

Burned out from her high-stress job at Microsoft, she moved from Washington to the Garden Island in 2007 and put her high tech skills to work as an information technology specialist. “It was a bit of a bummer to leave a company like Microsoft. I loved it, but it was hard work, long hours and really stressful,” Swanson said. “After 10 years, it was time for a change.” 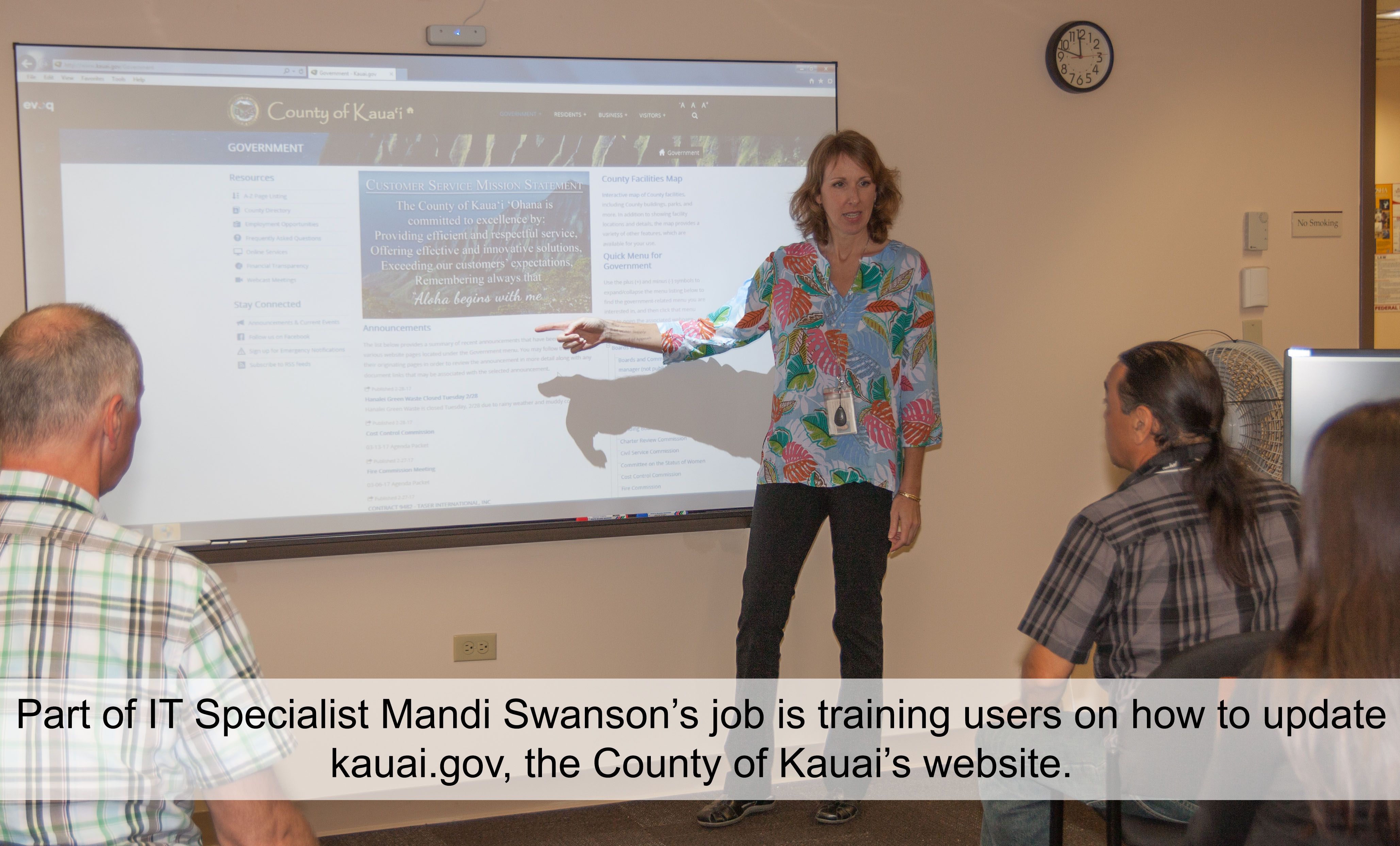 As an IT specialist for Kauai County, she manages the County’s official website, kauai.gov, and trains users in various departments and agencies of the County who are responsible for updating their portion of the website. Swanson’s broad technical experience and knowledge of Microsoft software and applications are valuable as she is the sole person in the county who manages their internal SharePoint system, which also makes it challenging. Additionally, she has created online applications, such as the eProcurement system for the County’s Purchasing Division and the DataBank for Life’s Choices Kauai (formerly the Anti-Drug Program), and manages the County’s Laserfiche document repository system as well as internal and public online forms. 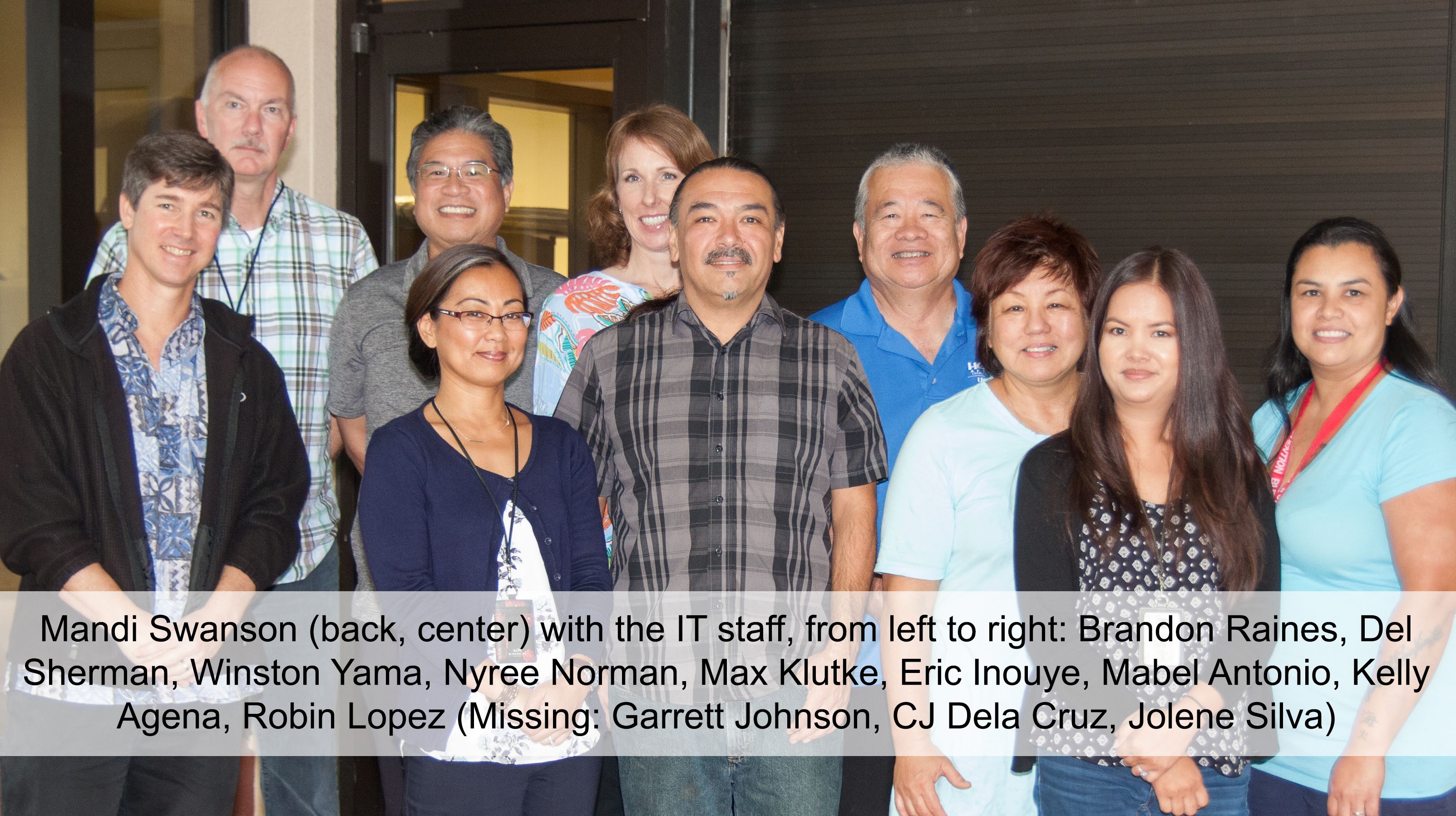 Although Swanson mostly works independently, she acknowledges the importance of teamwork. “I value the knowledge of my co-workers,” she said. “It would be a lot harder to do my job if I didn’t have the support of my manager and the other people on the IT team.” She likes how her work, through the website and supporting systems within the county, has a direct effect on the public and ultimately benefits Hawaii residents, visitors and her community.

After coming from a place like Microsoft, working in government for Swanson may have seemed a bit archaic and filled with a myriad of policies and regulations. Nothing personified that so much as her most memorable venture about nine years ago — a more-than-half-a-million-dollar scanning project that involved several different County departments and agencies and “a lot of sweat and tears and stress.” From an invitation to bid to purchasing and implementation — along with countless meetings — the daunting task to scan the backlog of paper documents for electronic storage took about three-and-a-half years to complete and a total of 5.6 million pages scanned. “Anytime you deal with procurement it’s stressful,” Swanson explained. “A lot of people are involved, and there are so many hoops you need to jump through to make sure that it’s all fair and competitive. But while this project was long and time-consuming, I learned a lot from it.”

Much like how she approaches life with a can-do attitude, Swanson takes on the challenges and new experiences that come with her job all in stride. In addition to her work responsibilities, she serves as the Kauai designee on two state committees relating to technology needs for the state and counties and online services they provide the public — Access Hawaii Committee, which oversees the activities of the State of Hawaii’s official Internet Portal Manager, Hawaii Information Consortium, and the Information Privacy & Security Council, which develops guidelines for government agencies on the loss, disclosure, or security breach of personal information that can contribute to identify theft.

“I really like what I do,” Swanson said. “I think my favorite part of my job is when I get something out of the ordinary like a coding or online application project. It challenges me because I have to think about coming up with a solution to solve a problem.” It’s no wonder that one of her other favorite things to do is roller derby, where strategy is key.

Since she started working at Kauai County, Swanson has always been involved with HGEA. She is a steward, Unit 13 Kauai Island Division secretary/treasurer and Kauai chair for the State Committee on Education and Training. “I had never been in a union,” she shared. “But my dad was in the boilermakers union, and his union was the reason he got work, period. Growing up I didn’t really know about the union fighting for workers’ benefits, but I knew it was better to be in one.”

Swanson certainly recognizes the value of being in a union. “It’s really important that workers know our union fights for their benefits every single time negotiations comes around. Their benefits are constantly being threatened, and if HGEA wasn’t around we definitely would not have the benefits we have today.”

For someone looking for an IT position in any company or organization, “I would just say do your best to keep up with the technology industry because it’s constantly evolving,” Swanson advised. “But I think it’s evolving for the better.”

For those starting any new job with the county or state, “I would say definitely get involved with the union.” Personally, Swanson encourages others to join and take part in HGEA activities and events. “Workers need to know that they have a say, that our union listens to them,” she added. “I appreciate how HGEA on Kauai is constantly trying to find ways to engage with members and keep them interested in our union.”

Her active union participation is definitely a no-brainer for Swanson. “Especially now with lawsuits that threaten unions today, it’s important that people get involved,” she said. “It’s hard, but I try to let others know that they should care because the more they get involved, the more secure they can feel in keeping their benefits they have today.”