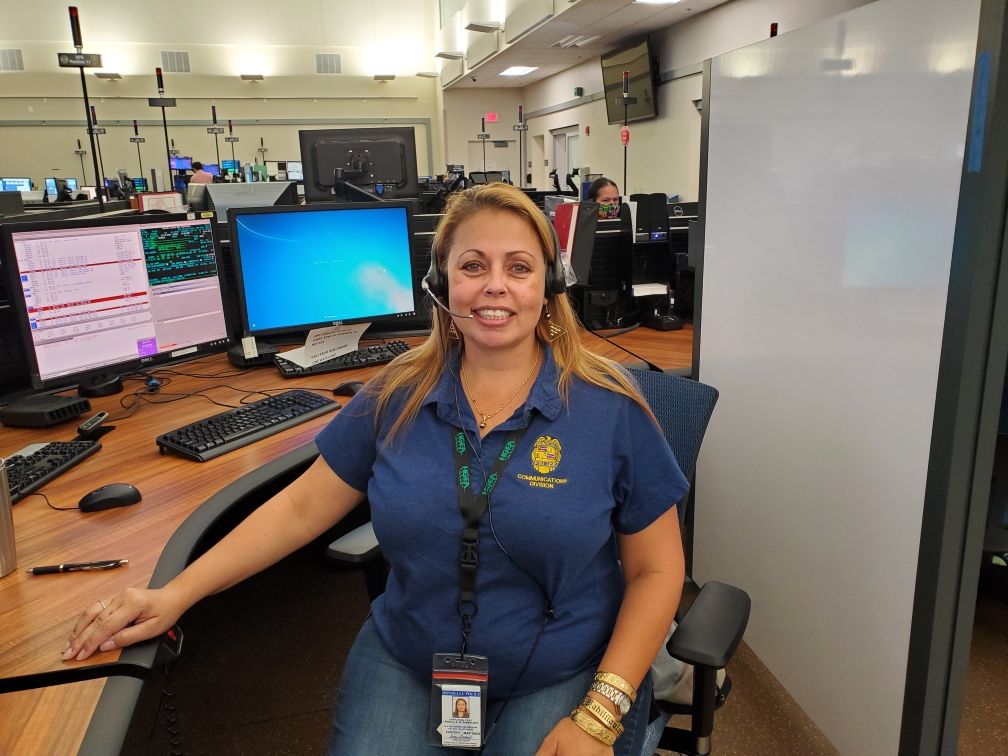 One expired N95 mask that was falling apart, one pair of disposable gloves and one container of sanitation wipes for the whole division. That’s what her employer had given to Police Radio Dispatcher Lakea Tjomsland after the first COVID-19 case in Hawaii was reported in early March. Nothing else since to protect herself and her fellow dispatch workers at the Honolulu Police Department’s Communications Division, a critical link in the emergency response network where nearly a million calls are taken every year.

“They issued one mask to everyone. The department hasn’t stepped up other than putting whiteboards between us and giving us Clorox and water only for the countertops. We didn’t get heavy duty cleaners or anything else. For them it’s status quo,” Tjomsland said. “The problem is that we’re not getting the proper sanitation. Disinfecting wipes, masks and gloves should be readily available. We shouldn’t have to be begging for protective gear. We should be able to do our job in a safe, healthy environment.”

For someone who is asthmatic, wearing even a cloth mask at work is not ideal for Tjomsland during an eight-hour shift since it doesn’t allow her to breathe easily and makes her wheeze. And she said wearing an N95 mask, if it was new and in good working condition, impairs her ability to do her job as a dispatcher who must talk to people on the phone and be clear and understandable. “It’s almost impossible to understand someone who is wearing one,” she added.

The lack of support and protection at work adds stress to an already demanding job. As a police radio dispatcher, Tjomsland — who has been working as a dispatcher for more than 20 years and continues to report to work even with the risks of being infected — has to be alert and calm as she takes calls ranging from parking situations and car accidents to domestic abuse and shootings. And she reported that the volume of calls seems to have increased during this pandemic.

“I don’t know if it’s because everyone is staying home together, but there is a rise in certain types of calls,” she said. “People also seem to be noticing more nuisances in their neighborhoods now that they’re home all day.”

Especially during this COVID-19 crisis, the police radio dispatchers and the 911 emergency response operators remain dedicated public workers, many working overtime and some coming in even on their days off, despite a shortage of 31 staff. “We are always there for the public no matter what happens,” Tjomsland said. “At all times those phone lines and those radios need to be manned 24 hours a day.” 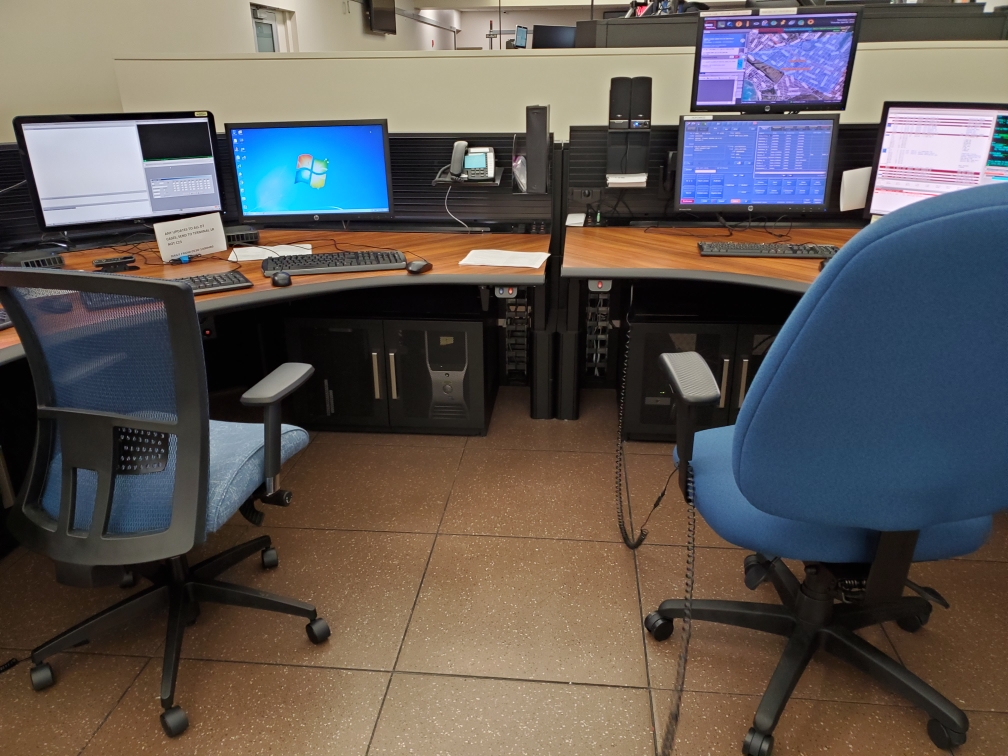 That’s why she feels frustrated that the department isn’t making their working conditions clean and safe. They were told they don’t necessarily need personal protective equipment like masks because they don’t work directly with the public, only with each other. “But while on duty I sit less than three feet away from someone so there’s no social distancing,” she said. “It (workspace) doesn’t afford for us to be farther apart than that because we have very specific equipment that I can’t take with me. Every time I need to go to the restroom, or I go on break or to lunch, someone has to physically relieve me, and I come back and take my position.”

What concerns Tjomsland is the shared equipment and workspaces not being cleaned during all the breaks, lunches and shift changes. “During the day there’s upward of 75 people in our division in our open common space. In essence, my worksite has not changed at all since before COVID. They’re supposed to be disinfecting our entire radio positions and call taking positions, including our three to four computer monitors, counsel tops and keyboards, but they’re not,” she said. 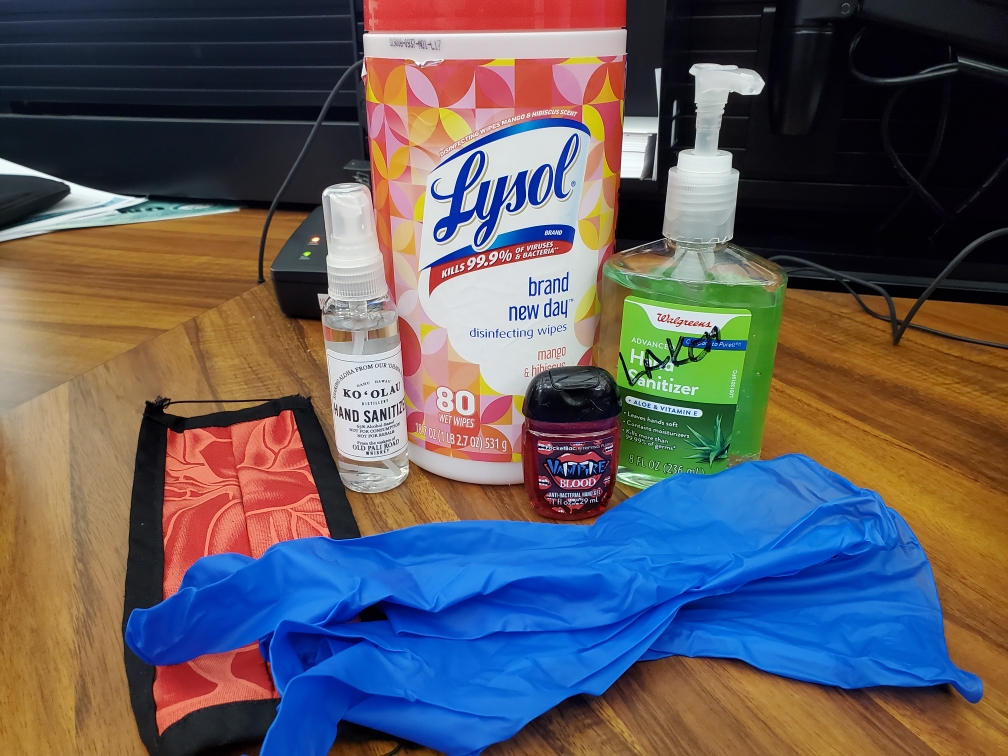 “The whole area needs to be disinfected. They need to get us the right type of effective cleaners for the equipment, considering we’re so close to each other and how many people are touching the same equipment and sharing workstations.”

Because she can’t wait for supplies to be provided to them, Tjomsland has taken it upon herself to make sure she and others in her division are protected. She along with most of the employees buy disinfecting wipes for each shift and bring their own wipes and hand sanitizers. Tjomsland also brings 80 proof alcohol to use as spray cleaners for her personal equipment and has even solicited and bought on her own fabric masks for her co-workers who did not have any, to use at work and outside of work. “I’ve been bringing whatever I can every day,” she said.

Tjomsland is especially concerned about her co-workers who have health issues such as diabetes, heart conditions and high blood pressure and are more susceptible to catching the virus. “They’re basically coming to work and going home so if they catch something, chances are high that they got it at work.”

She herself had a scare after recently testifying at the state capitol in support of a bill that would make police radio dispatchers first responders (currently, they are part of Bargaining Unit 3, which is comprised of non-supervisory clerical workers). During that hearing, she unknowingly was exposed to the coronavirus when the state senator she testified in front of was tested positive for COVID-19. Fortunately, Tjomsland’s test result came back negative.

For a group of workers who are presently classified as clerical and not first responders, they are there for the public regardless. “We signed up to be dispatchers. We stay and do whatever is needed to be done,” said Tjomsland. “The men and women of dispatch are there no matter what is going on in the world. We have worked through 9/11, tsunamis, hurricanes, massive shootings. We were there during the false ballistic missile when we had over 2,000 calls in the queue, and we stayed and called back every single person who called 911 that day. That’s why we’re just as important as anyone else out there handling the frontlines. The center is open 24/7. And somebody is always there to take the call.”