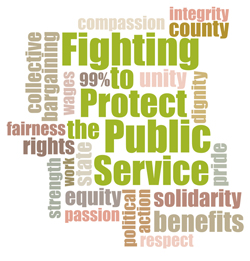 2012. This year's theme was "Fighting to Protect the Public Service."

As the highest governing body of the union, the General Assembly convenes every two years. During the three-day proceedings, delegates consider amendments to the HGEA Charter & Bylaws, establish union policies and set forth direction for the organization.

For members who did not attend the General Assembly and were interested in hearing the speeches, live streaming video was available on the HGEA website.